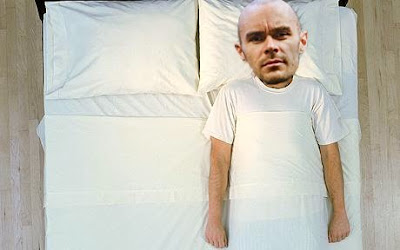 Some bloggers blog every single day. I am not one of those bloggers. Would you believe I don't even know how to type? What do other bloggers blog about? Real things? They just ramble on in a casual tone about their day? That's so boring...but I'm willing to try anything for a quick buck! Here's a "casual ramble blog" for you:

It's raining outside right now. It was nice all day, but now I can hear the rain hitting the window of the hotel. I'm tired, but I can't sleep. I think this trip to Toronto has totally thrown my schedule off. Before I left LA, I was going to bed at a reasonable hour and waking up before 8am. Last night I slept from midnight to 3am and then from 6am until noon?! What a weird schedule! The only coffee I was able to find in a short period of time was Starbucks. It's odd—I never go to Starbucks when I'm at home or have a choice, but I flock to it when I'm out of the country. They must have a deep psychological hold on me. The coffee's never that great, and the baristas never know what they're doing, but it's consistently disappointing and that's what I count on. AFI had a four hour rehearsal today in some warehouse on a soundstage. We haven't really played a show in a while and our crew needed to run through everything, plus it was good for us to run over the songs again. I sang all my usual backgrounds and harmonies, and by the second time through the set, my throat was raw. I guess I'm out of practice. For the record, I'm over shouting. It really just hurts, and never sounds that great. My favorite vocals are the harmonies on Summer Shudder and the ooohs during the intro and re-intro on Missing Frame. Two of my favorite basses from the last tour cycle need neck/fret work and I am playing my old back up bass for the show tomorrow. I don't like it as much because it's a bit on the heavy side, but it still sounds great. Fender makes some great basses. I'm designing some new ones for after we start touring for real and I'm really excited about those. Nothing crazy...just cool colors. Tomorrow should be fun. It's been so long since we've played a show (KROQ's xmas show doesn't count because our set was so short) that even if it totally sucks, it will still be fun. I'm kinda hungry. I should have bought some chips or a clif bar when I had the chance. I think the rain stopped. I forgot to see if the show is indoors or outdoors. I suppose it doesn't matter. The stage is always covered. It's weird, I can't really remember that last time I was nervous before a show. I know I was nervous when we played Just Like Heaven during the soundcheck for the MTV Icon: The Cure show, but that's because we were playing TO The Cure. I was probably nervous in my earlier AFI days when I was the new guy. I had to learn 15 songs in a month and then play in front of thousands of people with one of my favorite bands. The catch was—these were thousands of Offspring fans, not AFI fans, so I was too busy trying to win them over to be nervous. Did we win over any of their fans? I'd like to think so. I still run into people all the time that tell me that their first AFI show was on that tour. This was back in May, 1997. I turned 21 in the middle of the tour. L7 was on that tour too. They called themselves our moms on stage. It was really an amazing experience to play such huge shows at that point in my life. There were many years of crappy shows and long van tours after that, so it was an unusual way to start a career with AFI...but I like to think that it has come full circle. In more recent years, we've headlined some of the venues from my first tour. Time is a funny thing.

I feel like this isn't boring enough, and I apologize. The casual tone is working for me, but my thoughtless rambling seems to drift toward interesting things from the past. Let me try to focus on more mundane things from the present.

My phone is always set to vibrate. It's been like that for years. It always surprises me when it gets turned off of vibrate by mistake and I actually hear it ring. About a year ago, I set the ringtone to "motorcycle" which sounds like vibrating. Problem solved. Tonight I watched the Wolverine movie. I didn't see it when it came out because everyone said it was so bad. Rottentomatoes.com gave it an 8 or something horrible like that. I think everyone, including myself, was expecting something truly awesome. I walked in tonight expecting something truly sucky. It wasn't totally horrible, and since my expectations were so low, I kinda liked it. The writing was awful though. The lighting and SFX were so weird in the New Orleans fight scene that it took me out of the element. I think they tried too hard to put a bunch of actors and characters into the movie and just lost sight of what makes a good action movie. The popcorn sucked. I need to stop eating it. I never enjoy it. At least I stopped drinking soda a few years back. If I had soda tonight I would certainly feel awful right now. I'm excited to see the guys from Rise Against tomorrow. They're close friends and are passing through while on tour with Rancid. Joe Principe shares my love for coffee and we never miss a chance to get lattes. I can't wait to see them play in a couple weeks in LA. It's awesome to see your friends' bands doing so well.

I guess I should probably try to sleep. I don't have to be up early, but uninterrupted sleep is always the best, and those pesky hotel maids are always trying to break in and clean in the morning. I'm so glad I don't have to take time to wash and style my hair anymore. What a waste of time that was! If only I could have all that time back. I would have so much time on my hands! I could write a thousand blogs. It's raining again. Maybe it was always raining, but I just couldn't hear it. Okay, it's bed time for me. Blogger out.

Wow! That was boooooooring! I hope I never try that again! Casual rambling blogs might be fun to read, but they sure are boring to write! Until next time, Tranq out.

P.S. Which of the following should I do next? Another Psychedelic Photo blog? Horse Blog Vol. 2? A semi-irregular, Tranquil Mammoth multi-lingual statistic blog? Maybe another Tranquil Mammoth Challenge of 2009 like Horses vs. Fugazi?? Leave me a comment and let me know which of those you'd like to see.
Posted by Hunter Burgan at 12:08 AM 74 comments:

I eat your horse! 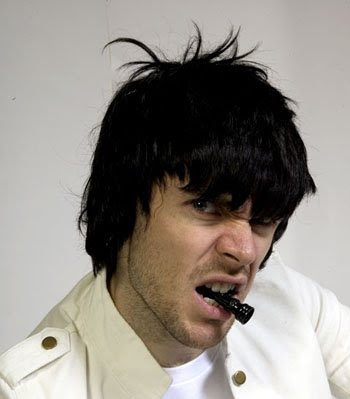 I know you probably think that I've completely neglected this blog, and in a way you are correct. The truth is, I've been writing a lot, but not on a computer. I've gone old school. Notebooks. I am working on something big, and I will tell you more about it later. For now, I hope you accept this picture as a peace offering. I know it's an old picture you may have seen before, but I still think it's funny.

P.S. I never blogged about the great loss we suffered. RIP Bea Arthur. Thank you for being a friend. Bea has been and will continue to be an important part of my blog.
Posted by Hunter Burgan at 1:42 AM 26 comments: 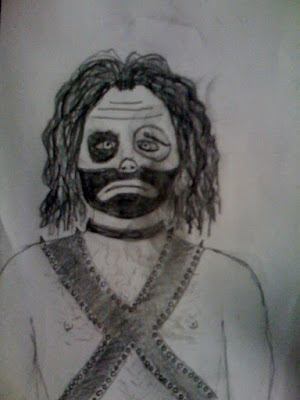 This is my concept sketch for a new member of KISS. It's a KISSafied cross between Emmett Kelly's Weary Willie and Pete the pup that Joe McGrath named "Bummo." I was going to dress up exactly like this and approach Gene Simmons and Paul Stanley when they were recording next door. I was hoping that they would accept me as a new member/character of KISS. I was even willing to be flexible about what instrument Bummo would play. Washboard? Cowbell? Synthesizer? This was my best career plan yet...until Gene and Paul ate our Uncle Eddie's* Vegan Cookies without asking. I changed my mind after that. As a result, the world will never get to see Bummo in real life. ;(


*Not to be confused with this Uncle Eddie.
Posted by Hunter Burgan at 2:27 AM 33 comments: