Time flies and so can you! 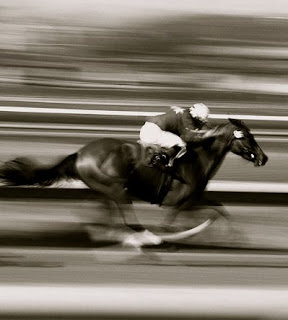 Since I've being working in the studio (AFI...heard of us?) a lot lately, I've neglected good ol' Tranquil Mammoth! I apologize. To paraphrase the guy who played the dad on Silver Spoons, "Sometimes you have to go out and live life in order to have something to blog about."

Back in March, Dr. Pepper (my favorite soda ever, even though I no longer drink soda) made a bet with America that Axl wouldn't release Guns N' Roses' Chinese Democracy in the year 2008. Since the new Gn'R album dropped earlier today (November 23rd), Dr. Pepper lost that bet and has been giving away free Dr. Pepper all day. They even extended it until 6pm EST tomorrow (November 24th) due to consumer demand. Click here to get yours now! 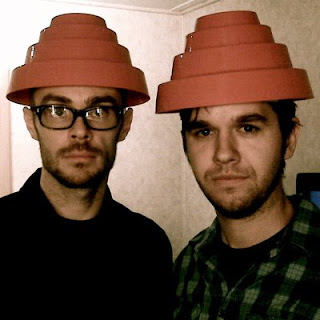 Check out Dan Kelly and myself wearing two of Devo's personal Energy Domes. These are the ones they actually wear on stage!

Halloween was a blast, although I'll admit that I had my mind on another holiday altogether. I'll talk more about that later. I went to see my pals in Rise Against at the newly remodeled Palladium in Hollywood. This is totally old news to some, but some people like old news (I personally hate old news). Rise Against played two Devo songs during their encore dressed as "Whip It" era Devo. It was fantastic, but their fans seemed bored by it. Gerald Casale joined them on stage for "Beautiful World". 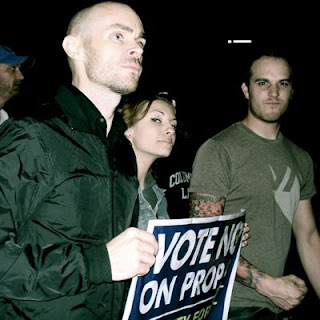 November found me at my local polling place, doing what every citizen should have been doing, talking to an old woman from my neighborhood who volunteered, and then voting. Only moments later I found myself terribly disappointed with the results of Proposition 8. What happened, California? Seriously?!? Anyhow...after that I hit the streets with Steve and Sally to protest (along with thousands and thousands of others) the blatant violation of rights. Steve originally had laser eyes, but I covered them up so my casual readers wouldn't be scared.

Eventually the green leaves on the trees turned to lovely reds and oranges, which served to remind me (with my friend Stacy's help, of course) that my pal Ed Templeton was having an art show in Culver City. You can read more about the show in his blog (which is a really great blog) here. 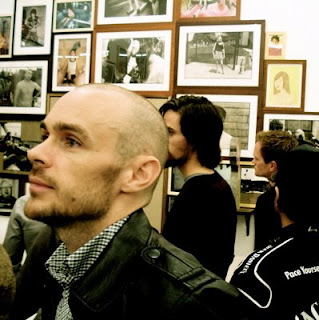 Here's a picture of me and Neil "Doogie" Patrick "Howser" Harris "MD" at the opening. He's over on the right by the wall. Facing the wall. I mean...at least he's in the photo, right?

I'm off now to get a few Zs (that's slang for sleep) before hitting the studio tomorrow. I have a few blogs I need to get out of my system in the next week, so check back soon for some of the following topics: an AFI studio related blog, a blog about the great Blockbuster heist, a blog to raise funds for the mammoth regeneration, a psychedelic photo (that's the only kind of picture my phone will take) blog and a holiday blog like none you have ever seen!
Posted by Hunter Burgan at 1:19 AM 42 comments: