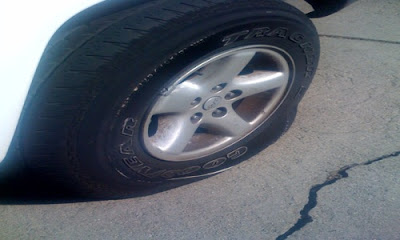 Hello, dear readers.
I'm working on something right now and I need everyone's help.
What can you do to help?
You can help by leaving me a comment that asks how to do something.
Here's are some examples:

How do I change a flat tire?
How do I break out of prison?
How do I make a vegan quiche?

You can ask as many as you like.
Feel free to get as creative as you want.
I'm looking for simple yet creative questions.

Note: I will not be answering your question, so don't direct the question at me.

Thanks everyone,
Hunter
Posted by Hunter Burgan at 9:38 AM 136 comments:

Camping With The Dad From Silver Spoons 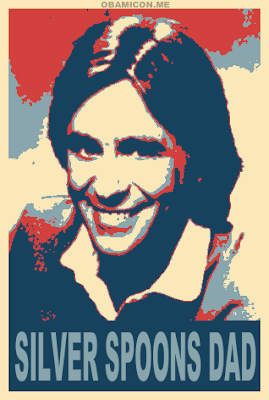 If I had to pick six people to bring with me on a camping trip, the dad from Silver Spoons would be my first choice.

My other picks would be: Gumby, a drunken cowboy, a jockey, and a non-threatening mummy. I also would bring a cartoon robot, even if it counted as one of my people. If the cartoon robot didn't count as one of my picks, then I would bring an animatronic cat from the Pirates of the Caribbean ride at Disneyland. They love the outdoors and are immune to poison oak. I can't wait until Summer!!! I'm really looking forward to going hiking and swimming. In the evening we can sit around the campfire and tell ghost stories. I bet the jockey will have quite a few! We will sing songs like "Careless Whisper" and roast some of these! This Summer is going to be great, just spending time with good friends and ol' mother nature.

"Hey the dad from Silver Spoons, will you help me look for more firewood?"

Which six people would YOU pick to go camping with?
Posted by Hunter Burgan at 12:58 AM 45 comments: 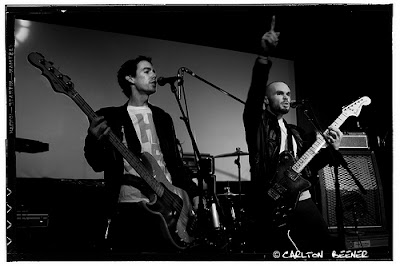 Hunter Revenge @ Cinespace on 2/1/09 by Carlton Beener
Okay, I lied about the date and time of this update, but I'm close enough. Two twenty-two at two twenty-two PM is the funniest time of the year (it's a proven fact that 22 is the funniest number) and I if I had not been laughing hysterically, I surely would have written this blog at that exact minute. So what has been going on? Let's make a list.

1. NAMM - In January, I took a trip down to Anaheim to attend the 2009 NAMM show. NAMM is a four day music gear blast that is the Comic-Con of gear nerds. To say that it is HUUUUUGE would be an understatement. Every company that makes any type of anything that's even remotely related to the idea of music is represented. I was asked to sign autographs for Ampeg. While I was there I ran into Tim from Rancid, Geoff from Tiger Army, Maya from The Donnas and a few other friends. I talked to bassist Tony Levin about photography (he carries a camera around his neck and takes pictures all the time, even on stage!) and even snapped a psychedelic picture of Mick Mars. Thanks to @flavapave for the software!

2. The Hunter - My new Macbeth shoe, The Hunter is available now! Order it online now, or wait another week and walk into Journey's to buy a pair. Your feet will thank you!

3. HR Show - On Feb 1st, Hunter Revenge played a very focused set in Hollywood, CA at a little place called Cinespace. We had a lot of fun, as we always do. Everyone who showed up had fun too. See how this works? Anyhow, this will be the last Hunter Revenge show until I have new songs to play. I love playing the old stuff, but it would be so much cooler to play new songs. I will have updates about the new songs soon. Keep your ears open.

4. Shorty Awards - You can read the post below to hear about my trip to NYC to accept the music Shorty at the Shorty Awards.

6. President's Day - AKA The Place Where I Wanted To Get An Awesome Vegan Burrito Was Closed And I Had To Settle For A Frozen Burrito Day.

7. Begin Transmission! - The winners of AFI's Begin Transmission contest joined us in the studio! As it turns out, Natacia, Raine, Mark, Courtney, Brock and Christy were all very good singers and really helped us out. It was really refreshing to have people in the studio that haven't heard the new songs 87652348 times already. After so much build up and excitement, the time really flew by and before I knew it, AFI's new friends (and their guests) were on their way home. I hope everyone made it home safely and I look forward to seeing these new friends in the future. Apparently Natacia and Christy commemorated the experience with BEGIN TRANSMISSION tattoos. How cool is that!?

8. Mammoth Regeneration - Yesterday at 3:30 AM I began the first of several mammoth cloning/regeneration experiments. My goal is to be the first person to successfully regenerate a mammoth. At 3:45 AM I realized that this was going to be more difficult than I first thought, due to the fact that I have no mammoth DNA. I consider this a minor setback. This week I'm going to head down to the La Brea tar pits, hop a fence or two, and "find" some mammoth samples. Wish me luck.
Posted by Hunter Burgan at 9:22 AM 22 comments: 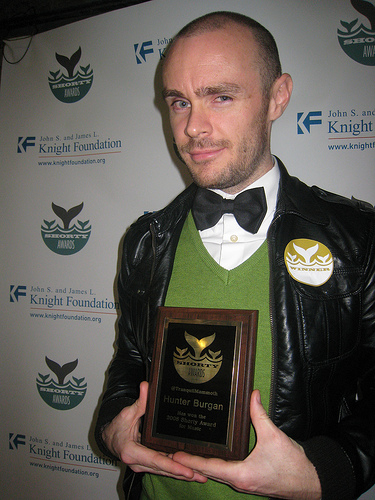 Posing with my Shorty Award.

A few days ago I had the honor of receiving a Shorty Award in the Music category. The Shorty Awards recognize those individuals who have expert-level mastery (or just plain obsessive use) of Twitter. The prize included a free trip to NYC and a chance to mix n' mingle with other Twitter savvy folks. CNN's Rick Sanchez hosted the event, and MC Hammer presented some of the awards (including mine) alongside Rick. I had a great time and met a lot of really cool people, many of whom I hope to stay in touch with. Highlights of the trip include getting a personal tour of the Marvel Comics Headquarters (thanks, Agent M!!), hanging out with my oldest and dearest friend Greg and his wife Laura (Thanks again for putting me up), and of course hanging out with MC Hammer. More can be read about this event here, here, here, and here. (and also here)
Thanks to Kelly and Daniela for the pictures! 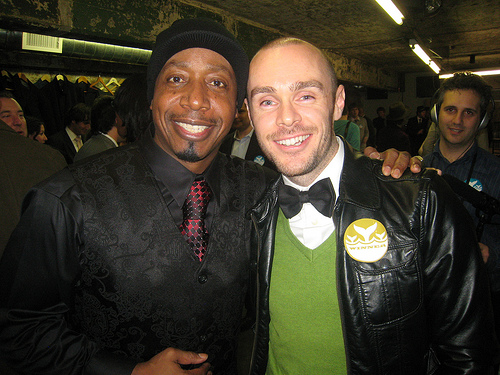 Hammer and Hunter - U Can't Touch This! 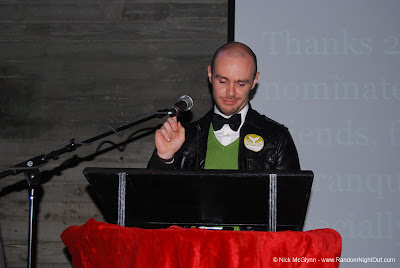 I tapped the mic to prove once and for all that the feedback you ALWAYS hear in movies when people step up to the podium doesn't really happen! It's a fallacy! 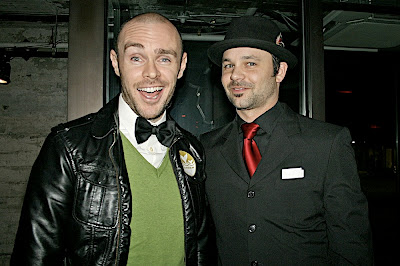 Two dapper lads: Greg Martin (my BFF of nearly 30 years) and myself. 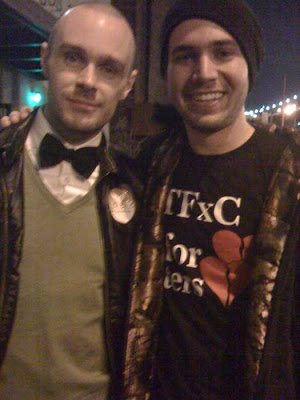 Charles Trippy and myself. He won the Shorty for Humor. 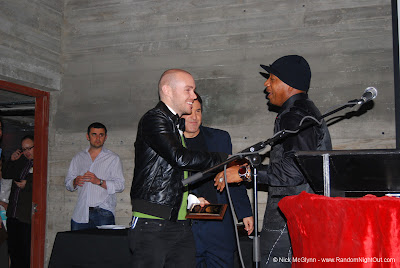 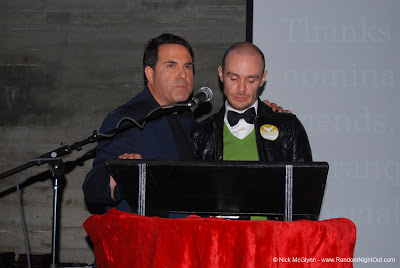 CNN's Rick Sanchez and myself. 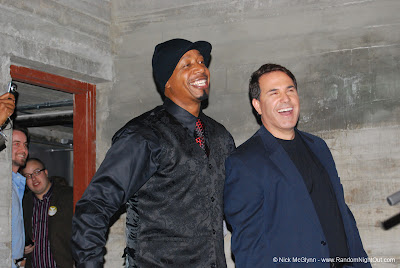 Hammer and Rick Sanchez laugh at my jokes (or at my expense!) 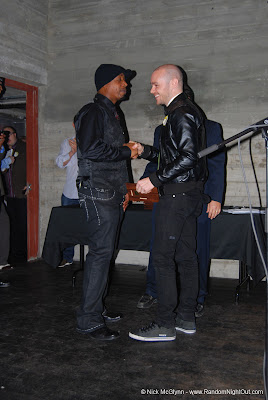 Hammer apologizing for joking at my expense. Don't worry, Hammer. It's all good. 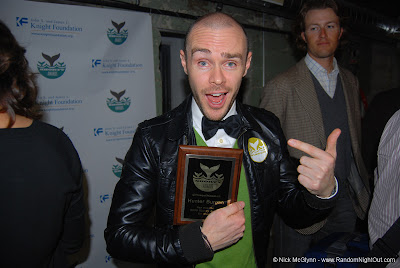 Look! My first Shorty! (the gentleman behind me is obviously jealous)
Like I said in my acceptance speech: "Thanks 2 everyone who nominated/voted for me; my friends, fans & followers; readers of tranquilmammoth.com; & especially all the @AFI fans." Follow me on twitter and maybe next year YOU'LL be meeting MC Hammer!
Posted by Hunter Burgan at 2:05 AM 42 comments: 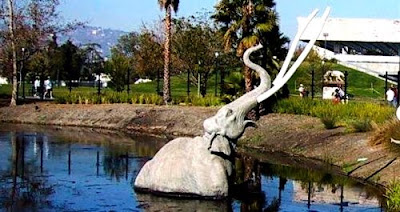 Some of you, may have noticed I added a "Tranq Rating" to the bottom of each post. This enables you, dear readers, to tell me if you think my post rules the Tundra :) or belongs in a Tar Pit :(. Hopefully this will help me determine what type of content to create in the future. 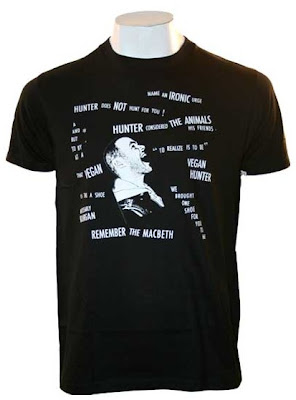 If you like t-shirts, then you'll love this one. It's made out of nice soft cotton (the kind the Olsen twins love) and features a scrambled version of the artwork that is inside my new Macbeth vegan shoe, The Hunter. You can order the shirt HERE. Oh, and guess what I just realized... 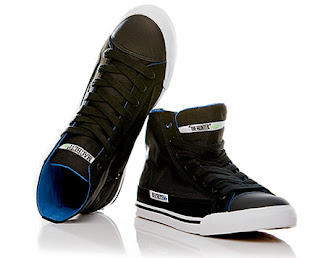 You can apparently order my new shoe, The Hunter, now too! Click here! It's totally vegan and totally available in men's sizes 5-13. Please do your best to ignore the rampant misspellings you may encounter while ordering my shirt or shoes. I lose sleep over these things, but it doesn't seem to help. I simply don't have the time to correct spelling errors all over the internet. 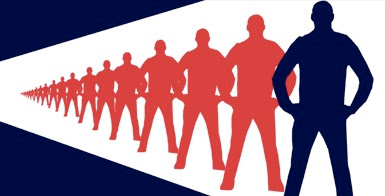 As if there wasn't already enough Hunter Burgan on the internet! I mean seriously! Haven't you had enough already!? If the answer is "NO!" and you want to see the overdose of photos and videos that I will be posting on Buzznet, then click on over!* If you're a Buzznet member, befriend me! If you're Rachel McAdams, befriend me!

There's a good chance you will find things there that you won't find anywhere else on the internet (read: exclusive) and maybe that's for the best! ;/
You be the judge!